Understand the baffling technology words and phrases you hear every day.

Life in the Cloud
What is the Cloud


Do You Want to Learn More?

Now that you've read the short, plain English explanation, are you ready to go deeper?

What is the Cloud?

The cloud is simply all the things you access over the internet. These include software, email, data, and files. When something is in the cloud, it is stored on an internet server instead of on your computer or a company's internal server.

The cloud symbol was borrowed from old telecommunications' network diagrams. They used the cloud to depict stuff that could be anywhere. 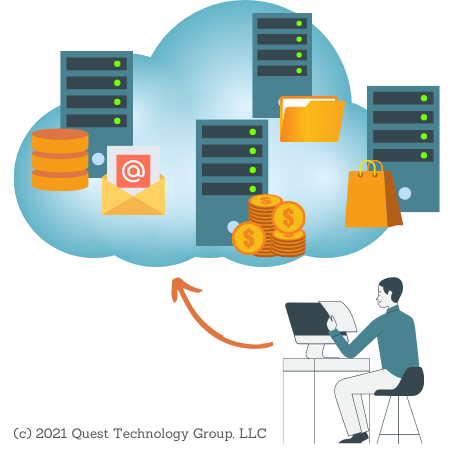 Other Cloud Words You Often Hear

On-premises means physically located inside the company. An internal server on your company's network is called an on-premise (or in-house) server.

SaaS is internet-based software-as-a-service. Instead of installing software on a local computer, it is accessed through a link or desktop icon. All the data associated with the software is stored in the cloud. These are typically applications and software provided by a third-party although a company can deliver its own software from internet servers.

What is Data at Rest?